GENERAL DESCRIPTION*
The top hat was an adaptation of the earlier postilian hats that were very popular in France. The first of these hats caused a considerable stir on the streets of London during the 1790s. On at least one occasion, a riot broke out because of the new fashion. They were the standard fashion by 1810 for most throughout much of Great Britain and North America.

The coat was the central focus of this outfit. Over the past several decades, the outer coat had gone through an evolution of sorts, during which the coat’s front had opened revealing the breeches or trousers beneath. By the early 19th century, that opening was cut open back to the sides leaving only the tails. Likewise, the waistcoat beneath became shorter to more closely match the front of the coat.

Men’s shirts also conformed to the new style. Higher collars and longer sleeves were the fashion. Rather than a simple slit down the front, 19th century shirts were placketed and more buttons were added.

Finally, trousers were more common attire, however, the poor, elderly, and those attending formal affairs could still be seen wearing breeches.

* This information is intended to serve only as a general recommendation. If you belong to a reenacting group or work for an historic site, we strongly recommend you check with your group first before purchasing this outfit. 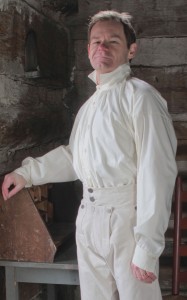 BUCKLES
Pictured: CS-926 Shoe Buckles.
Alternatives: Any of our men’s shoe buckles, or fold or trim the tabs back on our Straight-Lasted Shoes, and punch a couple of holes for laces.